In a vacuum diode, electrons are “boiled” off a hot cathode, at potential zero, and accelerated across a gap to the anode, which is held at positive potential V0. The cloud of moving electrons within the gap (called space charge) quickly builds up to the point where it reduces the field at the surface of the cathode to zero. From then on a steady current I flows between the plates.

Suppose the plates are large relative to the separation (A >> d2 in Fig. 2.55), so that edge ellEcts can be neglected. Then V, p, and v (the speed of the electrons) are all functions of x alone.

(a) Write Poisson’s equation for the region between the plates.

(b) Assuming the electrons start from rest at the cathode, what is their speed at point x, where

the potential is V(x)?

(c) In the steady state, I is independent of x. What, then, is the relation between p and v?

(d) Use these three results to obtain a differential equation for V, by eliminating p and v.

(e) Solve this equation for V as a function of x, V0, and d. Plot V(x), and compare it to the potential without space-charge. Also, find p and v as functions of x.

and find the constant K. (Equation 2.56 is called the Child-Langmuir law. It holds for other geometries as well, whenever space-charge limits the current. Notice that the space-charge limited diode is nonlinear–it does not obey Ohm’s law.) 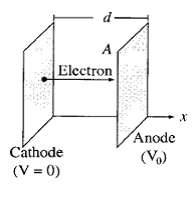